The evolution of maps: From paper to Soar.Earth

The full history of maps, and the human journey to fit the world in our hands.

For as long as humans have roamed the Earth, we’ve used various methods to navigate through our landscape. From the earliest form of navigation, relying on the direction of the sun and stars, to being able to access maps at the click of a button on Soar.Earth, we’ve come a long way. Here, we explore the history of maps; from cave paintings to the digital solutions we see today.
Early mapping‍

When humans first started making maps, they were very simplified and, to an extent, artistic. The map makers would usually focus on smaller areas of interest, such as a city or a trade route. The maps were a bit like pictures: not accurate to reality on the Earth. They were used to give the viewer an idea of what the landscape would look like.
‍
‍Many early maps were carved onto hard surfaces like clay and rock, but there are maps created on delicate fabrics as well. These maps were rather expensive to produce, so only the affluent and influential had access to them.

Today, these early maps are usually displayed as a work of art or history, instead of used as reference material. 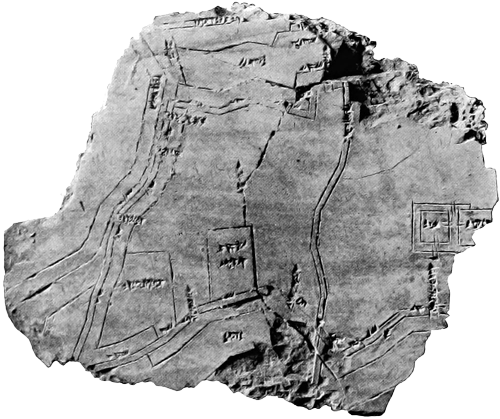 Clay tablet depicting the Babylonian city of Nippur, 1400 BC.
Math for maps

The map making world continued to progress, especially thanks to the efforts of the Greeks and Romans of the time. Claudius Ptolemaeus, better known as Ptolemy, was one of the most important historical figures in mapping advancements. He published a scientific treatise titled Geographia, or Geography, in English in 150 AD. The publication included thousands of references to maps of many parts of the world and included longitude and latitude lines.

This publication completely revolutionised the world of mapmaking, as it used mathematical rules to create the maps. Ptolemy’s work continued to contribute towards the development of maps well into the Renaissance era, a thousand years later.. 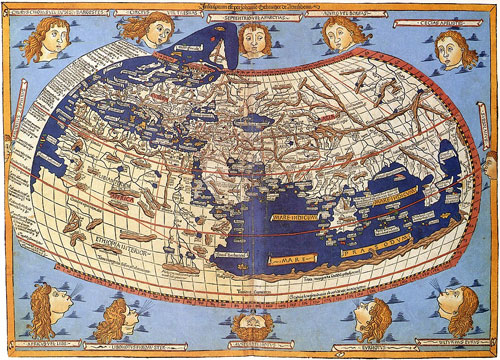 Ptolomy’s world map based on the contents of Geographia, 1482. Image credit: Wikimedia Commons. 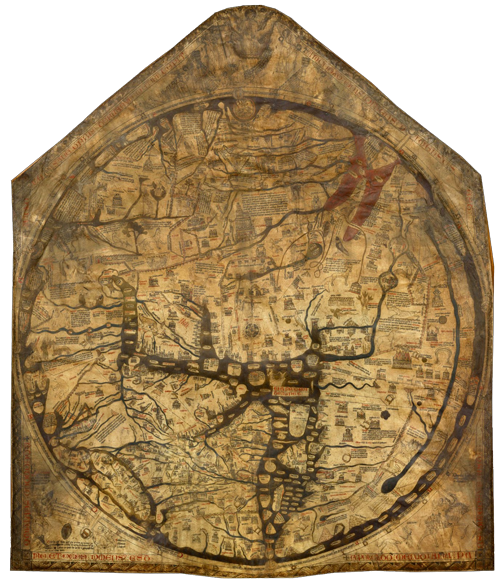 In Europe, there were little scientific advancements in mapmaking during the Middle Ages. Much of the map makers at the time were based in places of worship, so much of the focus was on the religious aspect of things. Because of this, many of the maps drawn at the time were heavily decorated with religious motifs, such as angels and mythical creatures.

A notable map from this area is the intricately drawn and coloured Hereford Mappa Mundi: the largest mediaeval map in existence. The map is circular and has Jerusalem at its centre, as well as the garden of Eden placed in a ring of fire at the top. These maps were not meant for navigation but more of an illustration to explain various principles.

While there weren’t many advancements in maps in Christian and Catholic societies, there were progressions to map making science in the Islamic world. They followed the methods set earlier by Ptolomy, building on that foundation and further advancing the science of map making. The improvements were based on the knowledge and notes from explorers and scholars during their travels across the Muslim world. These improvements included more defined measurement units and better calculations of the Earth’s circumference.

The Fra Mauro map drawn by Fra Mauro in 1450 compared to a modern satellite image of Earth. Image credit: Wikimedia Commons.
Early modern period (pre-industrial revolution)
‍
As technology improved over the centuries, use of cartography instruments and printed maps started to become more popularised. Cartographers were highly influential and growth in public education increased the thirst for world knowledge. Map making was no longer restricted to the religious institutions that had dominated the industry and maps became more accessible.

During this time, many countries in the western world wanted to expand beyond the reaches of their native soils, in search of political expansion and colonisation. To do so, they needed to produce detailed maps of the places they’d discovered, so cartographers and map makers became the key to political expansion. As more foreign soil was explored, the cartographers took note of their findings of the local cultures and environment in their maps.
Possibly the most notable advancement in cartography in history occurred in 1569, when Gerardus Mercator produced a groundbreaking world map, using a projection to allow the spherical earth to appear proportional on a flat surface. The projection Mercator created worked by keeping lines straight and distorting the size of land masses closest to the poles. His world map was the first created using what’s known as the Mercator Projection - which is still used as the standard projection in cartography today.

Another notable map of the time was the Kunyu Wanguo Quantu or the Ricci Map. It was created by Matteo Ricci, a Jesuit Priest and a founding father of the Jesuit China Missions. The map was written entirely in Chinese characters and is considered the oldest surviving map in Chinese showing the Americas. 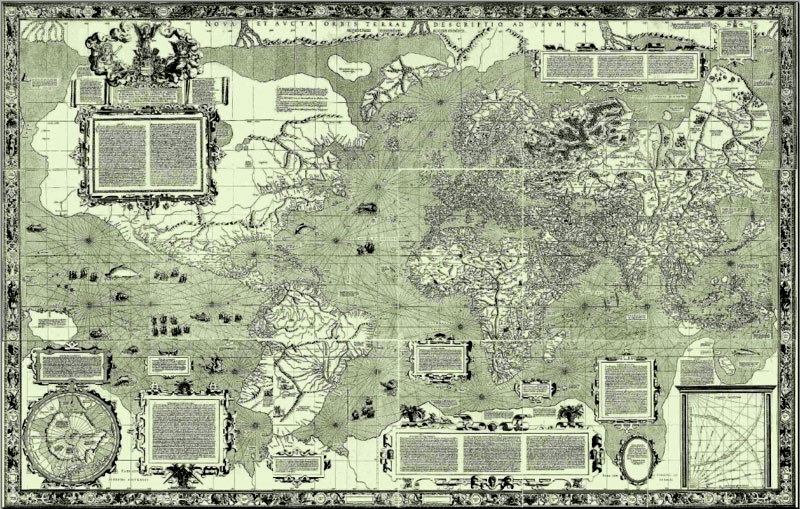 Between around 1760 and 1830, the wave of the Industrial Revolution saw traditional hand-made methods of production shift to machine operated methods. Technological advancements during the industrial revolution increased trade and commerce between nations. This drove a need for travel amongst business people and the emerging middle class, who were now able to afford luxuries once only available to the affluent. With travel becoming more frequent, the demand for compact and highly factual maps grew.

During this time, more experimental methods of mapping were explored and photography (and its subsequent technology) was invented. This eventually led to very early forms of remote sensing where photographs were captured from balloons, kites and messenger pigeons. The photographs were not particularly useful as maps, but they did prove useful in understanding landscapes to make more accurate maps.

The origin of other forms of remote sensing that aren’t photographs can be traced to the World War II era. Troops needed a covert and ‘invisible to the eye’ method of detecting the enemy, which led to the development of radar, sonar and thermal infrared detection systems. Aircraft technology also improved and aerial photography shifted from birds to planes. 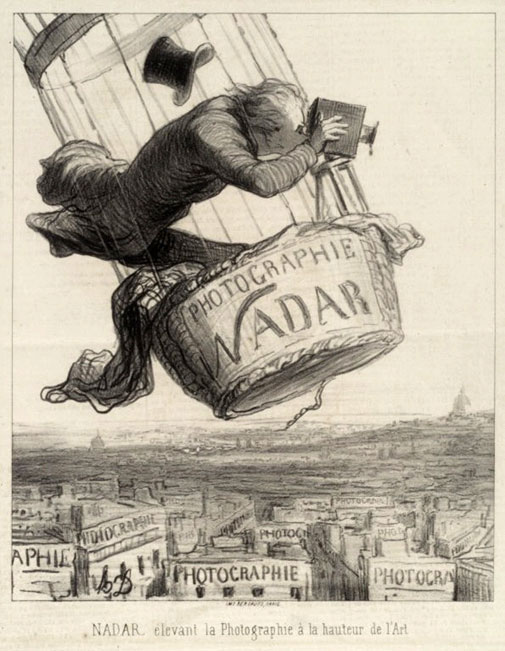 Top down photography from a hot air balloon. Image credit: Brooklyn Museum Online Collection.
With the emergence of new technologies, mapmaking and cartography started incorporating the use of computers as an essential tool. Paper maps are cumbersome and the only way to update them is to get a new one, so they turned digital. It first started out with scanning and digitising old paper maps. This eventually led to completely digital methods of cartography in computer software where maps could be updated digitally.

Global Positioning System (GPS) technology continued to advance, especially towards the end of the Cold War when Russia and the United States were competing in the Space Race. This race between nations pushed advancements in technology, resulting in satellite launches and human space explorations. GPS was originally designed to track the location of satellites in orbit, which trickled down to track naval ships, aircraft and eventually for general navigation purposes. 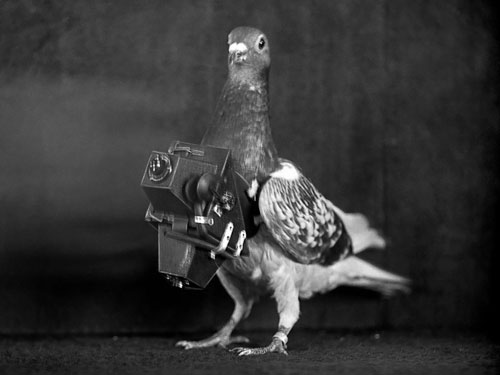 Photograph of a messenger pigeon with a small camera attached to its chest. Image Credit: Rorhof / Stadtarchiv Kronberg. 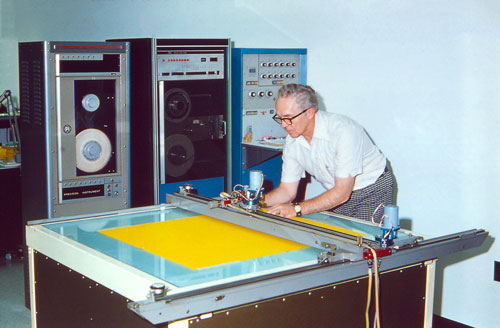 The early eras of digital cartography in the 1960’s. Image credit: USGS 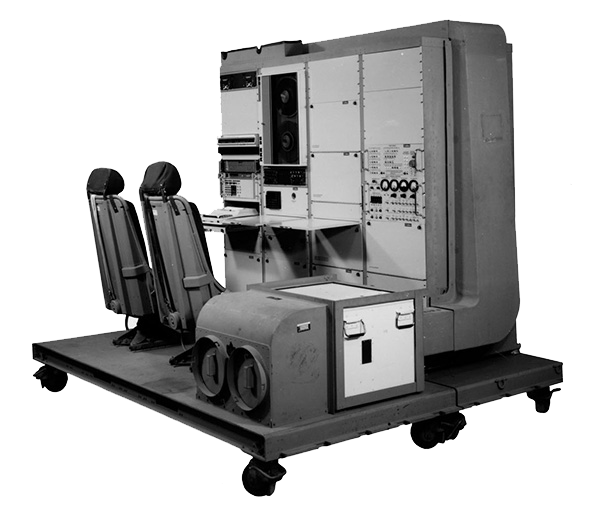 As satellite technology continues to improve, meteorological satellites and multispectral observation satellites began to populate around Earth. High resolution satellites that are able to capture images at less than 1 metre resolution are now available commercially. Data captured from these satellites turns into maps which are invaluable in helping us communicate essential information about climate, environment, public health, and more.

The globalisation of information through the internet has further evolved maps in the digital space. Maps are able to be distributed online and updated regularly. Technology previously only used in the military, like GPS and remote sensing from satellites, are now publicly accessible via an internet connection. Not only that, the internet has allowed the widespread of information on mapmaking and cartography. It’s no longer limited to specialists; anyone with basic understanding of a map can create one.

Computer and handheld technology also quickly advanced within a few decades of each other. GPS navigation migrated from standalone GPS devices into applications on a smartphone. GIS software previously limited to computers are now also available on your mobile device for those out in the field. Not only that, GIS and cartography are also entirely possible online with no need for any software.
The future
‍
The community of cartographers, GIS specialists and geospatial enthusiasts are increasing exponentially. Maps are not only made to inform but are now made as a hobby. This saturation of maps and imagery online is indicative of the major growth within this community. There is so much new information available out there, and people and communities are still able to benefit from maps created in the past.

Platforms like Soar.Earth are bringing the world of maps, old and new, to your fingertips by building the world’s largest digital atlas. With the sheer volume of map data out there, it can become overwhelming looking for the best source. Soar.Earth takes the stress away, with users able to explore maps and imagery based on location at their leisure, interact with other users, and form collaborations too.

It's amazing to see how far we've come, from the stone and paper maps above to the high-resolution, geographically-accurate digital maps everyone in the world can now access on Soar.Earth.

Take a look for yourself by browsing some of the great maps below. 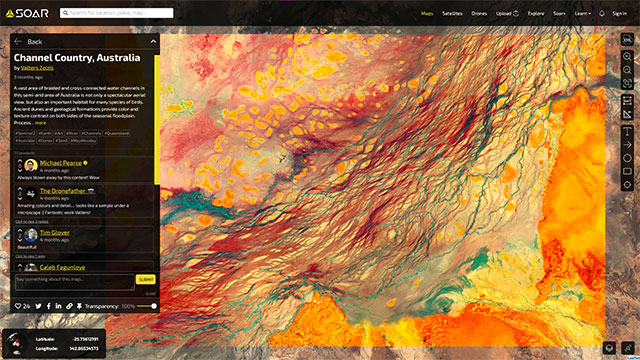 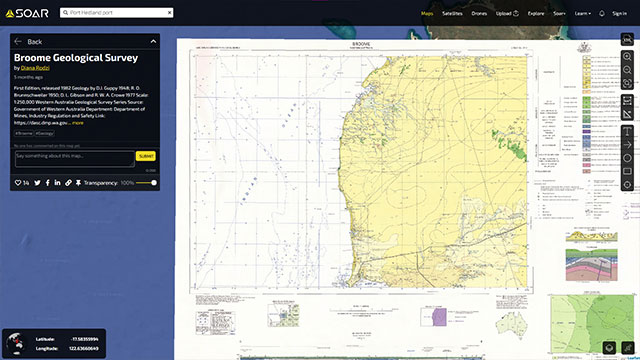 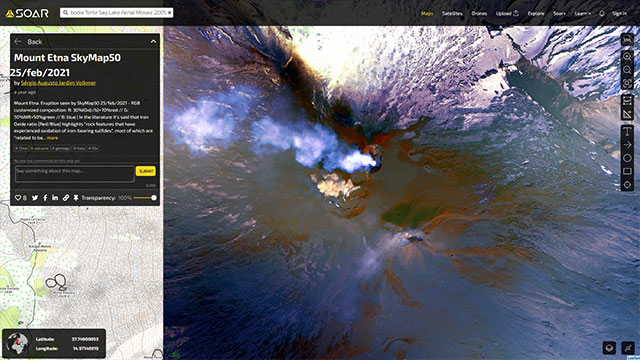 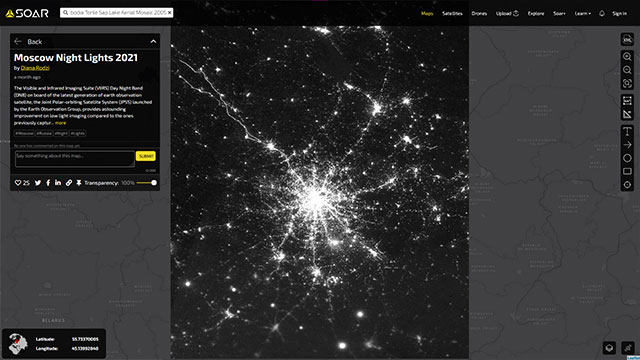 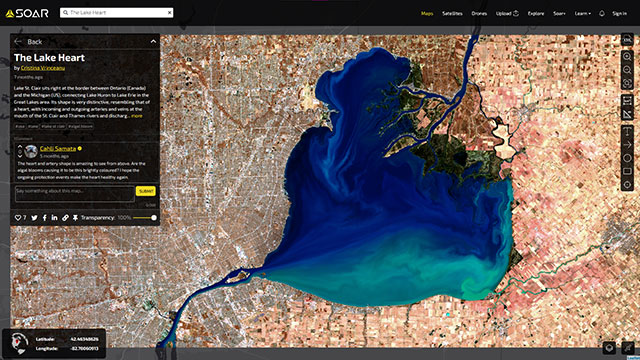 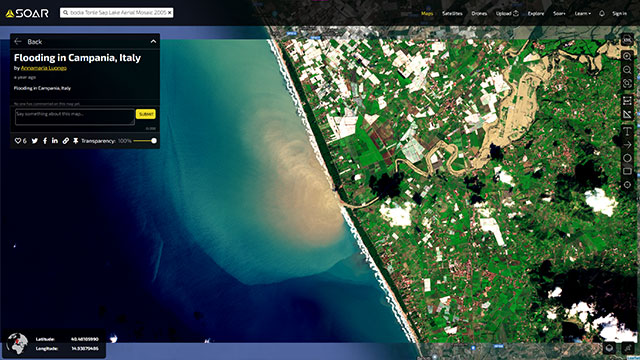 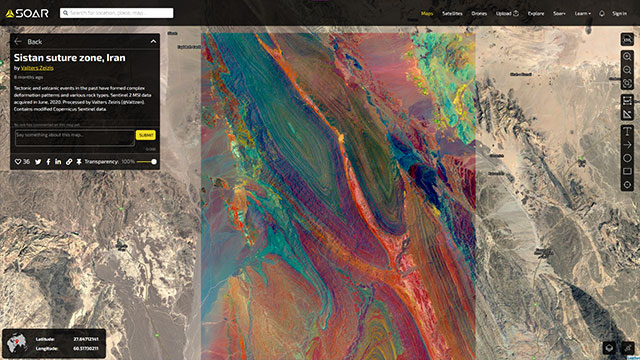 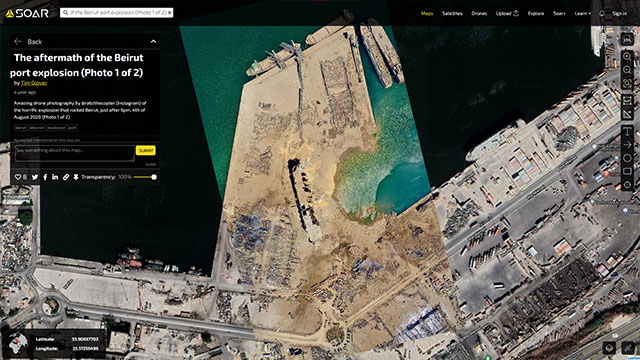 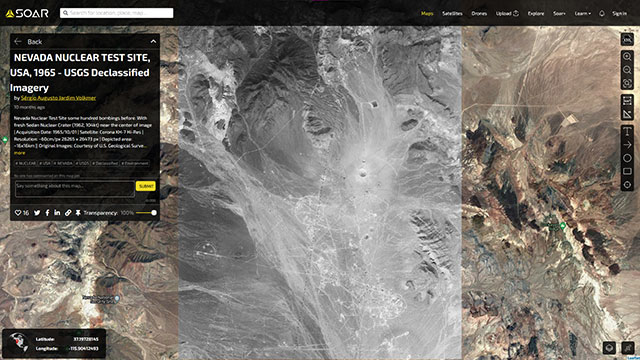 This blog was written by:

Diana is Soar.Earth’s local map aficionado, connecting with people in the field who share the same interest and passion in mapping and cartography. She's a big foodie, so she's always trying out the hottest new food joint or experimenting with new recipes at home.